Review: We Are Watching Eliza Bright by A.E. Osworth

Quick note: I received a free copy of this book from Grand Central Publishing via Netgalley in exchange for an honest review. That did not influence the content of this review.

We Are Watching Eliza Bright is about video games. And memes. And jokes. And it's also about none of those things. It paints a picture of how all those things feed into culture, and narrative, and belief, and values.

“It's not just games” echoes through the core of a book as it tells a tale where sexual harassment escalates to physical assault, and where game culture escalates to gamified gendered violence. At points, the book gets uncomfortably close to recent events, clearly drawing inspiration from actual episodes of harassment during Gamergate.

Personally, I loved every second. It's a emotionally difficult: Horrible things happen to the titular Eliza Bright. Eliza starts her first week of her dream job as a developer on one of her favorite video games, a superhero MMORPG. Her new coworkers mess up her code and write “boobs” all over it. Her company mishandles Bright's harassment report, so she goes to a journalist. The responses, of course, vary: She's taking things too seriously, it's just a joke, she's a feminist hero, would she like a new job with us, etc. Then one of the coworkers doxxes her. Eliza's blip in the news cycle turns into a barrage of harassment and stalking (much of which comes from actual things that have happened to actual doxxed women). Things get much, much worse from there.

In some ways, the plot takes a backseat to its telling. The thing is, we don't really know what happened with Eliza Bright. Dueling narrators fight over the chapters. On the one hand, we have toxic fandom, the obsessive players of the MMORPG that Eliza helps develop. On the other (slight spoilers), a group of queers who live in a commune that helps Eliza hide later in the book.

This book is a telephone game, and a conspiracy theory. Most chapters follow the twisted fantasies of the internet stalkers who imagine entire scenes based on a latitude-longitude code placing two people in the same room. They put pieces together from digital leftovers. As their information decreases in quality, they'll recast three versions of the exact same scenes, taking cues from hackers and public records and data dumps.

But they've never met Eliza, or her boss or her coworkers. And as they tell the tale, it becomes increasingly clear that the fans are living in a crass drama of their own making.

(It's basically reading a book narrated by this guy: 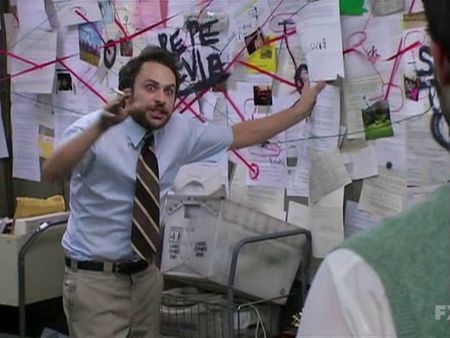 Meanwhile, the author is carefully constructing a story that shows all the ways said guy's talking points become literally dangerous – and relentlessly making fun of him.)

It sounds disorienting. In the hands of a lesser author, this could have gone horribly wrong. But this was one of my favorite parts of the book. Osworth handles it phenomenally – they balance readability, unreliability, and maybe-clues-about-reality. It's always extremely clear when the narrators are backtracking, and their biases are right on the page.

(Worth a mention here that Osworth has tackled similarly complex topics in their essays, often while messing with form, and I've loved those as well. See some standouts on bisexuality and thirst traps and gender in VR.)

If you're a reader who wants to definitively, actually know “what happened,” you might have some trouble with this book. The queer commune narrators do shed some actual, probably-more-accurate light on the proceedings later on. But a huge portion of the story is still filtered through others who are, you know, watching Eliza Bright, and not very kind about it. At the end of the story, you very likely know what happened – especially about certain key events that most definitely did occur – but you also have no idea about some tidbits behind the scenes. But, again, what actually, definitely happened every step of the way is, in some senses, beside the point.

A lot of fiction that takes this type of approach uses the ambiguity of the events, and the unreliability of the narrator, to avoid committing to a point of view. “We're just asking questions!” is the general energy. But Osworth does the opposite. Every bit of ambiguity in Eliza Bright's story builds to a larger point and structure. The book is full to the brim with a point of view, and that is not ambiguous.

Instead of distracting, these narrative lenses end up making a host of powerful points about paths of disinformation, how “harmless jokes” connect to more literal harms... and they also make a compelling argument that it matters who gets to tell a story. (A lot of recent books have had the thesis “stories matter.” Very few have really articulated why as clearly as this one.) The gamerbros straight-up on-the-page get mad that queer people get to take over the narrative, and it's fantastic. You can practically hear the same talking heads screaming “it's about ethics in game journalism!!!!!!!!!!” on Twitter.

This book has a sense of humor about most of its contents – but it's still deeply humane, sympathetic to its characters who do no harm and unflinching from the realities of its nastier occupants. This one's heftier at 420 pages, and a bit denser of a read if you want to pick out all the details. But it's well worth the mental energy.

Kae Petrin is a data journalist and media educator based in the Pacific Northwest. Find them at @petrinkae on Twitter.